“I Remember”: On Recalling Childhood 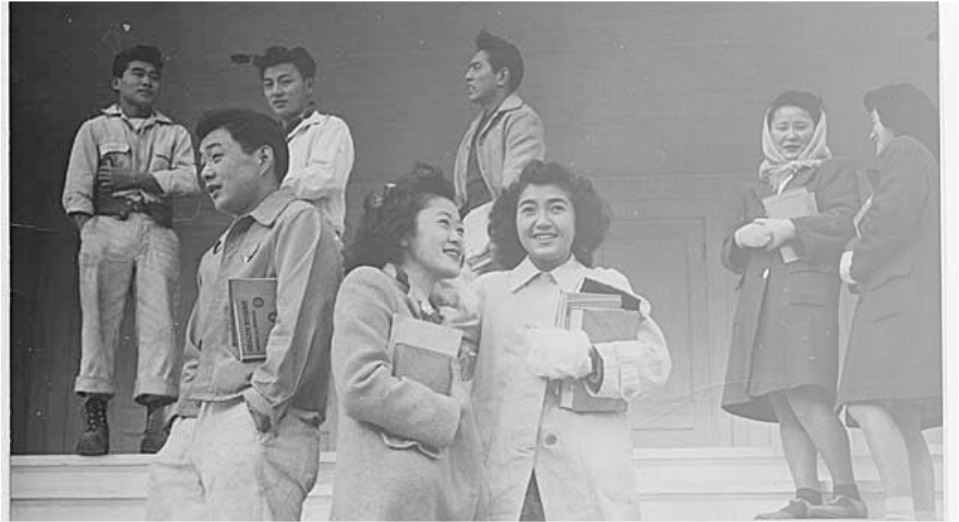 High school students on steps of gymnasium, Minidoka, ca. 1943. Brought to you by IMLS Digital Collections and Content.

Roxworthy notes Caruth’s assertion, “solely in the structure of the experience or reception: the event is not assimilated or experienced fully at the time, but only belatedly, in its repeated possession of the one who experiences it. To be traumatized is precisely to be possessed by an image or event” (Roxworthy 2). Several interviews in the Densho archives actually support this definition and claim, the first few being the interviews of PJ Hirabayashi and Roger Shimomura. Both recall their first encounter with racial discrimination at a young age more specifically five and six respectively. In her interview when asked about one of her playmates PJ speaks on her friend’s quick immersion into the public school culture stating, “her English developed very quickly when she was in public school” consequently losing a fair amount of her Japanese culture, but even when recalling this PJ is astonished as to why this is her first time acknowledging the rapidity of it all, “I never thought about that, we just seemed to get along and play” (Hirabayashi in Childhood memories: struggling with Asian American identity (PJ Hirabayashi Interview Segment 5)). In his own recollection of his childhood, Roger brings back to mind a memory of him searching through manila folders at his parents’ home at the age of forty, only to find pictures of his family that he drew in grade school. He says that what he found most interesting were the pictures that he drew of his mother with blonde hair and blue eyes. “I never realized it, there was my father, my sister, myself, but who is this blonde? He reasons, “And I’m sure I did that because with every good intention I wanted her to be the “ideal mother” and that’s what it took to be ideal at the time, to have blond hair and blue eyes (Shimomura in Developing interest in drawing in elementary school; depicting issues of ethnic identity through early art (Roger Shimomura Interview Segment 12)).  To explain this phenomenon, in her analysis of Japanese American  internment camp curriculum, Kylie Baker looks to Karen Coats who explains how dominant cultures  are likely to shape the "malleable identities" of children despite how despotic they may be. 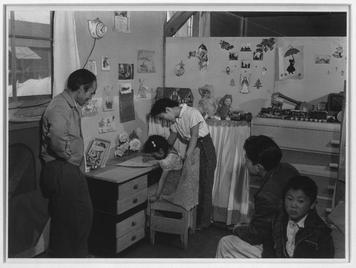 Family, Manzanar Relocation Center photograph by Ansel Adams. Repository. Library of Congress Prints and Photographs Division Washington, D.C. 20540 USA
The taunts that May and PJ experience are both new and unexpected. Unlike the parents of the African American children, Japanese American parents rarely ever spoke of the tension that existed cross racially. In fact, most encouraged their children to assimilate, but a few interviews reveal the Japanese Americans dichotomy of assimilating, and not receiving acceptance or receiving acceptance but only under the terms of the dominating demographic by abiding to stereotypes. For example, Lorraine Bannai, tells her interviewer about her experience with high school teachers and administrators. She says that because she went to school with students of the same semblance as her, she always felt safe. Even still, Bannai detected that school officials wanted to mold her into their stereotypical model student without taking into consideration the possibility of her interests in topics other than math and science (Bannai in  Avoiding the pigeonhole of racial stereotypes during school years (Lorraine Bannai Interview Segment 6)).

Similar to Japanese Americans, African Americans also had stereotypes which they attempted to correct. In Children’s Literature of the Harlem Renaissance, Capshaw explains how Dubois, a prominent figure at this time utilizes his theory “double consciousness” to combat typecasts. “By interacting with W.E.B. DuBois’ famous description in the soul of black folk (1903) of African American “double – consciousness,”
the image decidedly takes control of public identity, replacing bifurcation (“An American, a negro” in DuBois’ terms) with a spirited statement of black childhood’s integral connection to nationhood.” The purpose, Capshaw says is to develop progressive ideas for the “the child” in hopes that he will bring about some change (Capshaw xxi). This is where Japanese Americans and African Americans differed. As May noted existing racial tensions were never spoken of, this is how they coped with internalization of racial discrimination. Most parents like that of Susan Hayase simply encouraged their children to quietly integrate.. Roxworthy begins her introduction with this idea that “their silence and stoicism” added to their title as “model minority” (Roxworthy 1). Roxworthy seems to presume that Japanese American silence is unintentional and tries to veer away from the possibility that their silence may just be reflective of their cultural norms. Either way, this method seems to work for them more or less, unlike DuBois’ efforts to mobilize.

Ironically enough, in Capshaw’s footnote, Kevin Gaines states that DuBois' “uplift ideology to mobilize the missionary zeal of ‘better class’ blacks’ acts as an example of a variant of double consciousness which is not unlike May and Roger’s attempts to assimilate (Capshaw 277).” One direct result of May’s childhood experience is the donning of American names to all her children. Roger’s childhood experience was evident in some of his art work in his years preceding grade school. He explains how his inclination for creating renditions of Marilyn Monroe’s may have stemmed from his childhood. So, their coping mechanism was to internalize their experience and adapt accordingly.

Roger Shimomura recalls and explains  the effects of the Japanese American "survival technique" of memory repression.
He also speaks on his experience as a child living during the World War II era  (and what he thought were his immediate concerns). Shimomura grew up to become an artist whose artistic central focus became race, ethnicity and the experince of Japanese American in the 20th century. His oral histories can be found here at "Densho: The Japanese American Legacy Project."

Fortunately, their stories do not end here. May Sasaki eventually takes culture classes that help her regain her cultural pride, and Roger actually employs his artwork from childhood to teach and lecture on ethnic identity and art. As children, neither one was aware of their Japanese Identity, “I didn’t know what it meant to Japanese American . . . I just knew it was bad,” says May. In fact, they were so oblivious to this that when confronted with racism and discrimination, most are in distraught because they were not even aware of the markers indicating the differences in the first place. To cope, they immerse themselves in the social settings of their schools, but oftentimes this leads to the internalizing of discrimination which don’t emerge until Adulthood when identity is fully formed. In the end, their self-educating is what keeps them from self-deprecating ideas and contrary to Roxworthy’s interpretation of collective experience of trauma, individual experience of trauma if anything encourages individuals to speak out and become self-representatives, advocates for their own experience and in effect advocates for their people as well.

Minidoka, Idaho, was one of ten internment camps for Japanese and Japanese Americans during World War II. It held people originally from Seattle, Portland, Puyallup Valley, and Alaska.